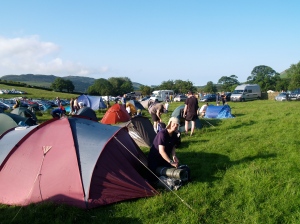 Marj at base camp. We slept in a much smaller tent at mid camp. “Get to know your team mate” is one of the important pieces of advice. You’ll be spending a lot of time together, some of it in close proximity.

Day two broke early- the gentle sounds of mid-camp waking us up just a bit too early. I had slept like a brick and could do with a bit more, but we had a tent to take down, and bags to pack, as well as breakfast to deal with. With an 8am start, we had time to make a cup of tea and eat some flapjack. Oats are great runners’ food. We had brought way too much. Lessons learned: calculate your food requirements more carefully so you don’t carry around unnecessary weight. While munching our way through a piece of cheese and some oatcakes, we mapped the location of the controls for the second day, and discussed some preliminary strategies. The cut-off time of 4pm in particular presented us with a problem: we’re not fast, and we know it. It was a big ask to be back on time. Some good climbs, some wet stuff, and most controls requiring more navigation than just showing up in the area and have it sitting there. I had earned my stripes as navigator on the first day, and was determined not to send us astray on this second day, especially now time was of the essence. If we did not get to all the controls in time, then so be it. We were aware of our limits.

As we approached 8am, we joined the queue for the start. There are a limited number of starting point controls here, and it took us about 6 minutes to get through the start gate. Off we went, in search of a control just beyond our view over the horizon. We picked a route and squelched on. (Yes, there was plenty more of that wet stuff underfoot). We climbed a gentle slope, and before long we settled in our regular routine: Marj at the front, picking the path and marching on, me behind carefully looking where I put my feet and glancing at the map frequently. (I have not yet mastered the art of doing that without stopping. Rule number one of fell running and walking: “Use your common sense and look where you put your feet.”)

When we found the first control, I re-calibrated my sense of distance on the map with that on the ground. We were in for a long day, I thought. But the next control should not be too difficult to find. We aimed for the right side of Hesk Fell, where we would drop down to a disused copper mine. Before long, we found ourselves on the Fell equivalent of a motorway. Being the last in the pack has some advantages, with others making tracks and -if you have a skilled compass reader who went there before you- an easy way to your controls. Control  two was easy enough to find, and from there we could plainly see number three. “We have to get to the top of THAT?” asked another team? Oh yes… Whitfell required a good climb to get there. We saw the tracks made by quicker teams, straight up the steep side. We decided to try a different approach, and aim for the side, with a slightly more gentle climb, even if it took us through some very wet bits. In our team, I am faster on the climb, Marj is quicker on the downhill. But this climb had us both gasping for breath well before we were at the top.

We had a brief stop when we got there and considered our chances. We could not afford to go much slower. But here, our luck turned for the better. The path to the next controls would see us walk or even run long stretches along the pre-made tracks of some excellent navigators who went before us. No big hills to get up, and some nice gentle down hills. No excruciating steep contours to follow, which twist your ankles more than the usual rate of twice an hour. (I am blessed with very flexible joints, so in general it is merely annoying to stumble that regularly over my own feet). Just sunshine, larks, marshy bits under foot and lovely wide vistas of the surrounding hills, safe in the knowledge you did not have to get to the top of most of them. We were making good time, and at control five we began to believe that we might just be able to do it, and do it on time. Wow. To have an official finish time, even if you are the last one, is something you strive for if you’re at our end of the pack.

Encouraged by that new view of the situation, we took a short break. We needed to make “swimming pool juice” (purified water) and “go-go juice” (pool juice with energy drink), and both of us need to fuel the engine at regular intervals. Some more “war paint” (sunscreen) was applied, when we realised how hot the sun was shining by now.

Control six was not that difficult to find on the map, but Swinside fell was just a featureless expanse of vegetation. Pretty, but not helpful to find your way. Two fences in quick succession on the ground, only one on the map. Hm… I like to know exactly where we are, and this was not helping. Before long, Marj confirmed her position as “path finder” when she brought us back to the Fell motorway. My compass had been pointing in the right direction all along. The featureless fell side eventually gave way to the stream junction we needed. On this hot day, we decided to make more swimming pool juice, even if we could start to smell the finish in the air. It takes 10 minutes for the tiny tablet to work its magic and make the water safe to drink. You never know how many dead sheep are lying upstream in the river, no matter how refreshingly cool the water feels as it rushes down the hillside. But the magic can be worked while we move, so we went on for the next control: number seven on top of White Hall Knott.

Getting there was easy: we had already gained sufficient height during the day, and had to drop down from White Combe to get to our control on White Hall Knott. Getting down from the Knott, however… After the “bip bip” which marked this penultimate control, began the longest twenty minutes of my life. I timed it. It can’t have been more than twenty minutes. I looked repeatedly on my watch throughout, as I felt time slipping away, but no… It was just ticking along gently, nothing to worry about. Timewise at least. 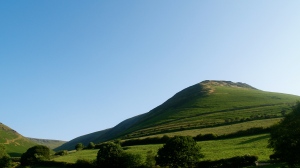 White Hall Knott, looking better from base camp than from the top.

As it was, I found myself sliding down the hillside on my bum. A few meters. Try not to crash in the gorse. Remind yourself that gorse has spiky bits. Be reminded by the gorse about that, as you try and grab hold of it to come to a halt. Stand up, shuffle a few feet sideways. Repeat. (No rinse). Again and again. After a while, the gorse mercifully gave way to bracken, and some sections could be run- or rather shuffled. The wet riverbank and mud were a very welcome change, when we finally got to level ground, and then we were on the path. Proper bridlepath, no less. Wide enough for two, and so to the final control at the entrance to the farm and then on to the finish. I’m sure my best attempt at running did not look more than a gentle jog, by this point, but I felt the need to emphasise that despite the terrain reducing us to a walk most of the time, at heart we are still runners. Mountain marathon runners, no less. With an official time to prove it.

I would like to thank Marj for dragging me into this, the wonderful training weekends we had together, and placing her trust in me as a novice navigator to see us through. I also have to thank my mum, who made some vital contributions to our medi-kit, which made the race a lot more manageable!